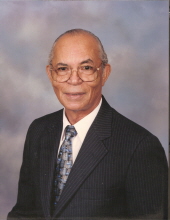 William James Morris, Sr. aka "Bill" or "Billy" was a quiet, caring and humble husband, father, grandfather, great-grandfather, brother and friend. He was born to the late Gilbert Morris, Sr. and Agnes Bernard Morris on September 24, 1936 in Cheeks, Texas. Bill was the 4th child of 7 siblings. As a child, Bill mainly spoke in French. He had fond memories of swimming in a once unnamed creek but now known as "Bear Creek". He grew up in several areas of Houston, Tx. He was a son of a rice farmer. Bill had many talents with carpentry being one. He had many fond memories learning this trade from his grandfather. Bill could see something and replicate it, many times without a blueprint. He was also a natural born truck driver. At a young age he was hired on the spot by proving he could back up and park a tractor trailer exactly where it needed to go on the first try. Bill was a culinary expert, he could cook! He was known for his smothered steak with rice, of course every meal included rice. Bill was baptized and accepted Jesus Christ as his Lord and Savior. He joined St. James Missionary Baptist Church under the leadership of Rev. Melvin Smith. He was a member of the male chorus, later becoming a well respected Deacon before answering God’s call to ministry. God gifted him as a griot, a storyteller, to teach the word of God. He later joined Wheatley Heights Baptist Church and attended for many years. He was a great dad and grandpa, his children were the pride of his heart with whom he created unbreakable bonds. Bill was preceded in death by his parents; Gilbert Morris, Sr. and Agnes Bernard Morris, his brother Gilbert Morris, Jr. and his sister Alberta Harmon. Bill leaves behind a devoted wife of 33 years, Robbie Morris; 6 beautiful children that he loved, Cathy Hutchinson, LaTanya Morris, Sylvia Blackshear, Tykisha (Jarl) Grace, William Keith Morris, William James Morris, Jr. aka "B.J."; siblings; Joseph Morris, Wilford Morris (Ann Marie), Charles Morris and Betty Morris, along with 15 grandchildren and a host of nieces, nephew and cousins.