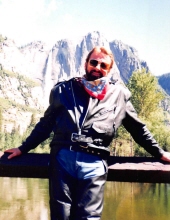 Richard Paul Keating,79, went home to be with the Lord peacefully surrounded by family on Wednesday, Nov. 20th, 2019. Rick was a loving husband, father, grandfather, great grandfather and friend to all who knew him. Born in Council Bluffs, Iowa on October 14th, 1940, Rick had a zest for life. He was a motor-head from a very young age and had the ability to fix, repair, and build anything he put his mind to. He loved drag racing and was a professional drag boat pilot, owning several successful drag boats. Rick found an easy career in sales that came naturally to him. In the 60's, he worked for Hemphill McCombs and Gillespie Ford. His career moved forward as he moved into the radio advertising business. He had successful careers at KBUC Radio, KTFM KQXT, KCOR radio and then ventured to the West Coast where his entrepreneurial spirit led him into the radio tower site building industry. He was also a pioneer in the automated radio industry. He retired on the West Coast. He stuck around California riding with a motorcycle club he founded called " Hermanos Unidos", in Bakersfield California, riding and enjoying the beautiful California scenery. He was also an avid scuba diver. After he returned to San Antonio, Texas, he lived his final years enjoying time with his kids, grand kids, great grand kids, shooting, hunting and fishing. Rick spent time with his boys supporting their many outreaches and activities. Rick had a deep love for animals, was a supporter of the ASPCA and his last two dogs were rescue dogs, Bandy Girl, and Ms. Bears. Rick was preceded in death by his parents, Marvin and Marjorie Keating, and granddaughter, Reagan Paige Keating. He is survived by his brother, Scott Keating of College Station; his sons, Rex Keating and his wife Tisha, Ricky Keating and his wife Jaime. Also survived by his 4 grandchildren, Michael Keating, Ryan Keating, Rayce Keating, Matthew Keating and great grandson, Mason Keating. Rick also leaves behind many friends and associates that miss him dearly. Pastor Johnny Vaughn will officiate the funeral service to be held at Meadowlawn Funeral Home on Saturday, December 7, 2019 at 10;00 a.m.