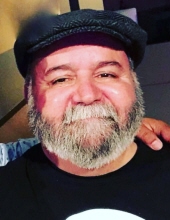 “As the deer pants for the streams of water, so my soul pants for you, Oh God.” Psalm 42:1 Richard Reyes, Jr was born to Richard Reyes Sr. and Rachel Reyes on July 7, 1956 in the Bronx – a borough of New York. He quickly became an essential core of the family, holding the title of only son and only brother. After graduating from Islip High School, Richie enrolled in the Baptist Bible College in Clarks Summit, Pennsylvania, where he studied Theology and Biblical History. There he met and married the mother of his three children, Debra Brink Reyes and together they continued to pursue the path of service within the body of Christ, Richie becoming an ordained minister, licensed to share the gospel he both loved and lived. Working to provide and living to share the word, their path would take the family, now with three young children from the east coast of New York, by way of an assignment in Wisconsin, and eventually settling in San Antonio, Texas where he would raise his family and continue his quest to know more, be more and do more to enlarge the body of Christ. Richie did this through his creativity, writing monologues, performing skits and creating fully casted stage plays, developing characters from his own life experiences and creating personas that took on lives of their own. A love for the arts led Richie to accept a position at Six Flags Fiesta where he played several character roles in their stage performances. In 1991, Richie and his family joined Daystar Church in San Antonio and through that affiliation settled his family at Family Praise Center of San Antonio and served under its leadership, Pastor Rick Hawkins, and later Pastor Dustin Hawkins, from its inception to its expansion to Place for Life. A ministry he loved, served in and wholeheartedly believed in its mission and leadership. Richie was preceded in passage by his parents, Richard and Rachel Reyes, and his wife Marjorie (Hathaway) Reyes. He is survived by his son and daughter-in-law, Joshua and Erica Reyes, their children Maverick, Sophia, Danielle and Jackson; his daughter and son-in-law, Catherine "Katie" and David French and their children Zoe, Elisha, Ethan and Zander; his daughter Megan and her children Jazmine and Jaydon; sisters and brothers-in-law Susie and Mike Trautman, and Rosie and Vinny Rotolo, His aunts and uncles Ruth and Joseph Arzola, Debby and David Nemitz, special cousins Ray Arzola and Dennis Bernstein, many loving cousins, nieces and nephews and a host of friends, many of which considered Richie family. Richie was an ordained minister, held various leadership roles throughout his nearly 50 years in ministry, was a Boy Scout Leader, a Fine Arts Director, Choir Member and Youth Leader. In every role, Richie was passionate, committed and he led with his heart. Richie leaves both an indelible impact and a traceable imprint on this life we continue. A bearded father, the celebration of his 10 grandchildren, his hopes for his family have been spoken over their lives as declarations since their birth. Those words will echo throughout their lives. As the transition has taken him from mortality to eternity, his essence, lessons and blessings will remain paramount and tangible.