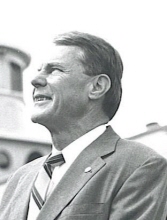 Having valiantly outlived his Myleodisplasia prognosis by years, Robert Baynham Terrell died peacefully at home on May 25, 2007 after briefly battling pancreatic cancer, surrounded by family, during the fifth verse of “Amazing Grace” sung at his bedside. Born on September 12, 1926, Robert was the son of a New England Baptist minister, Dr. William Sale Terrell and Marjorie Smith Terrell who was active with the National Council of Churches serving as president of Church Women United during the Eisenhower administration. Born in Syracuse, New York, Robert, or Bob as he was known to many, parlayed his gift with the English language through a long career reliant on his careful, eloquent choice of words. After serving in the United States Navy at a gunnery post on liberty ships during World War II, Bob graduated from Phillips Andover Academy and embarked on his career with words at Colgate University preceded there by his father and brother Huntington. His quick wit and charm soon captured the heart of his bride of 56 years, Arline Gesswein Terrell whom he married after his graduation, on July 21, 1951. After completing his English major, Bob was obituary writer for the Hartford Courant in Hartford, Connecticut followed by a sports writing post at the Westporter-Herald. He then accepted a public relations post at Connecticut General Life Insurance Company in Bloomfield, Connecticut, a position he held through his Assistant Secretary appointment for 14 years. During his Hartford tenure, Bob became a loyal blood donor often coming home with the small stick pin in his lapel of a drop of blood with a cross on it. Having given gallons of blood in his lifetime, it was only fitting that his battle with Myleodisplasia relied heavily on the donations of others requiring frequent transfusions. From Connecticut General, Robert became Director of Information at the Rouse Company in Baltimore, Maryland at the inception of the building of the city of Columbia, Maryland. In the meantime, union unrest and corporate takeover of the largest privately owned shipyard in the world, the Newport News Shipbuilding and Dry Dock Company, precipitated the need for a strong, vibrant, articulate man at its public relations helm where after 24 years, he retired in 1991 as Director of State Affairs and a registered lobbyist with the Virginia General Assembly. Throughout his business career, Bob participated passionately in volunteer activities. His involvement with the Visiting Nurses’ Association segued to Virginia governors Baliles and Wilder appointing him to the Statewide Council on Infant Mortality and the Southern Corporate Coalition to Improve Maternal and Child Health. This precipitated his appointment to the Medical College of Hampton Roads as a commissioner in 1987, then Vice Rector and finally Rector, a position he held for an unprecedented eight years. During this time he led the Virginia Peninsula Chamber of Commerce as Chairman of the Board during which time he also chaired the United Way of the Virginia Peninsula as Campaign Chairman. The Executive Committees of the Planning Council and the Future of Hampton Roads found him an active participant while serving as Vice Chairman of the Habitat Management Committee of the Virginia Marine Resources Commission and the Chesapeake Bay Land Use Roundtable. His passion for his organizations can best be summed by fellow committee member in 1994, Mary Louis Campbell, “He displays a vision which is grounded in solid principles of accomplishment. He’s selective in his efforts and plays a strong role in pursuing the goals of those institutions for which he’s working.” Tireless in his business and volunteer endeavors, Robert was also a devoted family man enjoying his final years in San Antonio, Texas. He is survived by his wife of 56 years, Arline Gesswein Terrell, daughter March Terrell Henley, her husband Steve and their son Henry of Woody Creek, Colorado and Linville, North Carolina; son John Rigby Terrell of Pacifica, California; daughter Melissa Terrell Moss, her husband Douglas, their daughters Elizabeth and Hannah of Pacifica, California; and daughter Kate Fairbank Terrell, her husband John Castillo, their son Geddes and newborn daughter Lucy of San Antonio, Texas. He is also survived by three nephews and three nieces. Considering his early volunteer days directing the Visiting Nurses’ Association, it was especially poignant that Hospice by Odyssey Health Care, Inc. guided his comfort during his final journey. Oganizations that Bob generously supported may be remembered in his name: World Wildlife Fund, The Nature Conservancy and the First Unitarian Universalist Church of San Antonio. It would also please Bob to encourage those who can to donate blood. A memorial service will be held in late June at the First Unitarian Universalist Church of San Antonio.