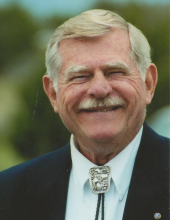 Robert (Bob) Brantley Mitchell was born in San Antonio, June 27, 1925, and died peacefully in his sleep December 21, 2019. Bob graduated from Alamo Heights High School in 1942, where he met his wife, Joan. He began at Texas A&M class of 1946, but his education was interrupted by WWII. He served as a Marine Radio Operator and was involved in the battle of Iwo Jima. After the war, Bob returned to the states, married Joan Valdez. Together, they had 4 daughters: Betsy Buncis, Joanna Swift (Charlie), Linda Champion (Matt) and Robin Casseb (Paul). He completed his degree in 1951 and joined his father’s construction firm, GW Mitchell & Sons, Inc., where he worked until retirement. He cultivated orchids and spent countless hours with his “pretties” in his backyard greenhouse. He loved fishing with his buddies at Port Aransas. He and Joan traveled extensively and were heavily involved at St. Luke’s Episcopal Church for 70 years serving in many different capacities. Bob served on the Zoo Board, was a member of the Alamo Kiwanis Club (with 55-year perfect attendance record), Alamo Iron Workers Trustee, Associated General Contractors, Builders Exchange, and many other organizations. In 2016, he was thrilled to participate in Honor Flight for WWII veterans. The last few years of his life were spent living it up at the Forum at Lincoln Heights. We truly appreciate the loving care showered on him by the compassionate staff. They all went above and beyond in caring for Dad. We also want to acknowledge Embrace Hospice. His nurse, Mindy Fuller and Margie Arzola, assisted with Dad’s daily care. Their personal attention helped make our dad’s final years enjoyable. Bob loved life and was a joy to those who knew him. He loved everyone and never forgot a name or a face. Every day was party day for Bob, and we will miss his optimism. In Dad’s own words: “I can’t breathe, and I can’t walk, but life is great! What time is lunch?” He was preceded in death by his wife of 71 years, Joan V Mitchell. Bob is survived by his brother Melvin M. Mitchell and wife Yeola, his four daughters, 11 grandchildren and 25 great grandchildren. In lieu of flowers please send donations to St. Luke's Episcopal Church or a charity of your choice.