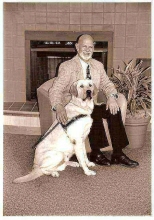 Robert D. Etten passed away on Sunday, June 17, 2007 in San Antonio at the age of 69. Robert was born on March 28, 1938 in New London, CT to Nicholas Etten and Katherina Schiefer. The family moved to Waterloo, IA in 1950 and owned Precision Tool, Inc. where he was office manager; in retirement he moved to San Antonio. Robert is survived by nephews, Steve Etten and wife, Marty, Lary Etten and wife, Sue, Jeff Etten and wife, Becky, and Chris Etten and wife, Cathy, as well as sister-in-law Marge Etten. He is also survived by a host of great-nieces and nephews, cousins and close friends. He was preceded in death by his parents and by his brother, John Etten. Robert was vision-impaired, and had three faithful guide dogs over the years, Steele, Nieman and Grizz. A memorial service will be held at 10:00 AM on Thursday, June 21, 2007 at Meadowlawn Memorial Park, 5611 E. Houston St. To leave a note for the family, go to www.meadowlawn.net and select Obituaries. Arrangements by Meadowlawn & American Mortuary. Memorials can be sent to Guide Dogs for the Blind, Inc., P.O. Box 151200, San Raphael, CA 94915.