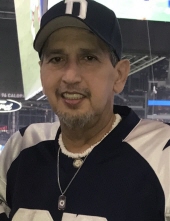 Rodolfo “Rudy” Mejia Jr., age 54, passed away December 1, 2019 in San Antonio, Texas. He was born in San Antonio, December 24, 1964 to Rodolfo Sr. and Juanita Mejia. In high school he played football for the Owls and is a graduate of Highlands High School. He later became a trucker and worked for a few different companies. He also coached little league baseball and football. He met his loving wife, Cynthia in 1997, and they married July 18, 2008. Rodolfo was very loving and giving. He loved hunting, telling jokes, music and barbeque. The BBQ he cooked got him placed in a few competitions. He especially loved The Dallas Cowboys. He loved his family and cherished the time he spent with them. Rodolfo is preceded in death by his parents, Rodolfo Sr. and Juanita Mejia; nephew, Joshua Rodriguez; father in law, Rodolfo Lopez Sr.; He is survived by his loving wife, Cynthia Mejia; children, Desiree Mejia and Elizabeth Martinez; sisters, Sandra Martinez (Mark), Evette Segovia (Richard), and Patricia Mejia; grandchild, Dezmond Mejia; with numerous other nephews, nieces, family and friends. Rudy was a wonderful person and will be truly missed by so many.