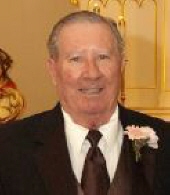 On December 31, 2016, Roger Joseph Micheal Ryan went to be with the Lord at the age of 74. He was born in Defiance, Ohio to Leo & Evelyn Ryan on September 11, 1942. He joined the United States Air Force at the age of 17, where he served his country for 6 years. He was trained as a data analyst and continued his career as an analyst in accounting, then went on to owning a small delivery service before he fully retired in San Antonio, Texas. He is survived by his children, Douglas Ryan, Cheri and husband David Jester, and Mark Ryan and wife Selina; grandchildren, Brian Hooper, Dustin Ryan, Jared Ryan and Summer Ryan; siblings, LeaAnne Metzger, Frederick "Bub" Ryan, Barry "Bruce" Ryan, Michael "Mike" Ryan, Barbara Ryan and Betsy Ryan-Mankovich. Roger was preceded in death by his parents, Leo & Evelyn Ryan; siblings, Richard "Dick" Ryan, Terry "Tuff" Ryan and David Ryan.