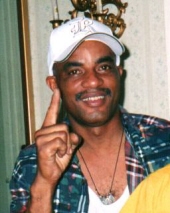 Ronald Anthony Williams entered into eternal rest on Wednesday, September 3, 2008. He was born in Temple, Texas on December 20, 1956 to Mary Franklin and Roger Williams. He was preceded in death by his father and sister, Barbara Armstrong. Ronald was baptized when he was 6 years old at Mt. Zion Baptist Church in Temple, Texas. He attended schools in Temple, Texas, Germany and in 1975 he graduated from Theodore Roosevelt High School. He also took business classes at San Antonio College. Ronald was a hard worker and over the years was an asset to several organizations such as First Mate Restaurant, Coca Cola, Southwest Texas Blood & Tissue and UPS. His career at UPS lasted 24 years and he received numerous commendations for his hard work and dedication for a job well done during his years of service. Ronald was an avid sports fan. His favorite teams were the Dallas Cowboys and was a Spurs fanatic.. His favorite TV shows were Gunsmoke and Bonanza. He also liked to listen to different kinds of music from Michael Jackson, Tupac to Country Western. Ronald leaves to cherish his memory, his mother, Mary Franklin; his children, Victoria D. Rodriguez, Shea Williams and Ibrihim M. Williams; grandchild, Mia Esparza; sister, Toni Franklin-Roy; brothers, Solarr Molina, Clem Coleman, Claude Coleman and Donny Williams; close companion, Sylvia Flores; a host of aunts, uncles, nieces, nephews and many close friends.