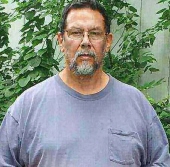 Ruben was born in Waelder, Texas to Mrs. Rosa Juarez Suarez and Juan Macias Suarez who both preceded him in death. Ruben is also preceded in death by sisters Ernestina Campos, Yolanda Maria Campos, and only brother Alfredo Suarez. He was educated in the public school system of San Antonio, Texas, but left school by 7th grade to join the work force to support his family. At a very young age he applied his love to others as a faithful provider. He later displayed his God-given attribute towards his wife, children, nieces and nephews, grandchildren and great grandchildren who also considered him and respected him as a father figure. He was a man of many passions: from his fascination of trains, and driving 18-wheelers, taking long drives and exploring new places, to fishing at his favorite spot in Sea Drift or Rock Port, or where ever he could cast his fishing lines. He had a taste for a wide variety of music and even loved to dance like James Brownwhich was a sight to see! When he couldn't get away, he spent his time with his plants and fruit treeshis "garden on earth." There was so much to admire about him and his God-given talents while he wore his many different hats: mechanic, plumber, electrician, welder, carpenter, and we can never forget he made some mean bar-b-que chicken! Ruben was a man of courage, strength, and shelter for otherscharacteristics he displayed from his youth to the day God called him to walk in "Heaven's Garden," where he walks with no pain, no sorrow and no tears. For on the recorded scrolls of the Father in Heaven his name is engraved: "The Beloved Ruben Suarez" A golden heart stopped beating and hardworking hands put to rest. Ruben leaves to mourn his passing his sister Lollie Boyles. Ruben leaves to cherish his memory his children Sofia Espinoza, Rachel Suarez, Ruben Suarez Jr., Andrew Suarez, daughter-in-law Marisol Suarez and son-in-law Frank Espinoza; Grandchildren Vanessa Alderete, Valerie Espinoza, Frankie Espinoza, Marc Espinoza, Michelle Martinez, Matthew Martinez; grandsons-in-law Adam Alderete and David Ramirez; Great-Grandchildren Averie "vanilla" Alderete, Amerie "chocolate" Alderete and David King Ramirez III. He leaves a very special companion of 40 years to cherish his memory, Bertha G. Suarez, who will miss him dearly. He will also be missed by his "girls," Sandie and Sissy (his faithful Chihuahuas). As well as a host of nieces, nephews, great nieces and great nephews. The family would like to thank both relatives and friends for all prayers and overwhelming support given during this time. We are thankful for God's grace, mercy and strength he has provided and continues to provide. May we hear Ruben singing praises to the Lord, with the angels in heaven, while we carry his memories with us wherever we may go.