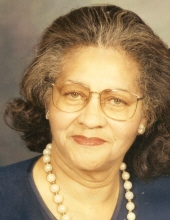 Mrs. Ruth Anne Marie (Johnson) Wilson was born October 24, 1930, in Cuero, Texas. She was the youngest daughter born to the union of Mr. and Mrs. Waldo (Beulah Dove) Johnson, who preceded her in death. She was also preceded in death by her husband, the late Deacon Milton L. Wilson, and two sons, Eric L. Wilson and Paul T. Wilson. Three brothers also preceded her in death in the persons of Mr. Jeru M. Johnson, Herman S. Johnson and James M. Johnson. Along with her parents, Mrs. Ruth Anne Marie Johnson and her siblings were faithful members of the Macedonia Missionary Baptist Church in Cuero, Texas, under the Pastorate of the late Rev. Allen Cooper. As a young girl, she accepted Christ as her Lord and Savior Jesus Christ, and was later baptized. She served in many capacities at the Church, to include serving as a Sunday School Teacher and as a Youth Leader. She was educated in the Public School System of Cuero, Texas. Being a studious person, and a scholar, she graduated with honors at the top of her class as Valedictorian from Dauley High School, in 1949. Not long after graduation from high school, she was chosen by her home Church, as one of the Young Adult Youth Leaders, to attend a Baptist Sunday School Conference, which was being held that summer in San Antonio, Texas. It was there that she met her husband, Mr. Milton L. Wilson. It was not long thereafter, that Mr. Wilson traveled to Cuero, Texas to meet her parents. After just three months of courtship, the happy couple married on September 3, 1950, in a Sunrise Wedding Ceremony, at Macedonia Missionary Baptist Church, in Cuero, Texas. The couple then moved to San Antonio. Shortly thereafter, they moved to San Diego, California. To this union, the first five children were born, in the persons of Milton, Ronnis, Cophra, Eric and Frankie. Five years later, they relocated back to San Antonio, where their two youngest sons Paul and Billy were born. In 1970, the family then joined with the Antioch Missionary Baptist Church under the dynamic Leadership of the late Pastor, Rev. Dr. John Joseph Rector, Sr. Before her husband’s passing in 2011, Milton and Ruth Anne Marie Wilson shared 61 years of marital bliss. Mrs. Ruth Anne Marie Wilson was a beautiful and loving Christian woman, who loved her family dearly. She was also a very sweet, kind hearted and dedicated homemaker for her family. She was a caring and faithful wife to her husband, and a Phenomenal mother to her children. She also loved her grandchildren tremendously. She leaves to honor and cherish her beloved memory, three sons, Milton H. (Alicia) Wilson; Ronnis L. (Janice) Wilson; and Billy J. Wilson; two daughters, Cophra A. (Rev. John J. Rector, Sr, Deceased), and Frankie D. (Prof. Alfred) Williams; three nieces, Brenda C. Lee; Gloria L. Hutchings; and Zelma J. Turner. She also leaves one nephew, Artist W. Curry. Precious memories shall also be treasured by her fourteen grandchildren and twenty great-grandchildren, and a host of other relatives, family members and friends.