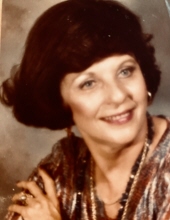 Ruth Jane Burgess, nee Freedman, passed away on October 26, 2020 at the age of 95. She is survived by her three daughters, Jane Lynne Mints, Debra Ann Rosenstein Jones, and Jennifer Rosenstein, her grandchildren, Amber, Savanna, and Raven, and five great grandchildren. Ruth was born in Pittsburgh, Pennsylvania on January 8, 1925. She was orphaned during the Great Depression and sent with her sister, Doris, to live with their aunt and uncle in San Antonio, Texas, the only relatives who could afford to take both girls. Ruth attended high school at Jefferson High School, and was married at age 19 to Dave Greenburg, a veteran of WWII, whom she met while working at Lackland Airforce Base. Their marriage ended, and Ruth returned to San Antonio with their daughter, Lynne. Soon, she remarried Samuel Rosenstein. Together, they built MARS and RAMS Plumbing Supply during the 1960’s and 70’s. Ruth was a loving wife and devoted mother. She loved to travel, to laugh with friends, was a fabulous cook, and known by all as the life of the party. Hers was a home where all were welcome. She will be missed. May she rest in peace.