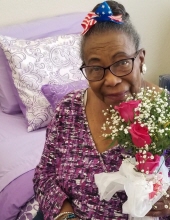 Sarah Reed was born March 26, 1928, the 2nd child of 3 sisters born to William Henry Brown and Sarah Thomas Brown (both deceased). Lillie Brown, her oldest sister preceded her in death in May 2017 at the age of 91. Her baby sister Inez Lister also preceded her in death at the age of 79 in March of 2009. Her step-brother, Benjamin L. Brown also preceded her in death at the age of 86 in October of 1994. Sarah Married Eli Reed on December 21, 1950 in San Antonio, Texas. Their union created 3 beautiful children; Quinton E. Reed, Darryl Reed, and Marsha A. Reed. They resided in San Antonio for many years afterwards. She was employed by the Hargis Family for quite a few years which developed into a lifelong friendship. The family moved to Dallas, where the children completed high school. Sarah was later employed as a Unit Secretary at Methodist Hospital in Dallas until her retirement in 1991. Her husband Eli Reed passed away on November 2, 1998 and was buried at Fort Sam National Cemetery with honors. Sarah’s hobbies consisted of cooking, in which PIES were her specialty. She could also make a scrumptious brisket in the oven. She would often travel to San Antonio from Dallas to visit her Sister Lilliewho later was moved to a skilled nursing facility due to her failing health. Sarah would spend numerous holidays with Quinton and his family during her time in San Antonio. Friends would make visits with her as well on her trips. Over time, the care she would give to her beloved sister Lillie took a toll on her health as well. Sarah unfortunately could no longer stay in Dallas and made the difficult decision to relocate to San Antonio to reside in same facility as her sister Lillie. Upon notice of the closing of Chandler Estates, she was moved to Brookdale Senior Living on Fredericksburg Road. Sarah had a yearning to lean more about the Lord with her son and family and on November 22, 2015 became a member of Grace First Baptist Church, pastored by Allen M. Ford. She was present each Sunday the Lord provided her with the strength to attend. Sarah was a devoted church member, and was very proud of her constant growth in her walk with the Lord. Those who knew Sarah could see her continued walk with God, which was evident by her church attendance. She will be missed and remembered with happiness. Sarah Leaves to mourn her 3 children, daughter-in-law (Anitra), 6 grandchildren Renalda (husband Torian), Quinson (wife Danielle), Brandon, Jasmine, Xavier and Avery) 5 great grandchildren ( Georgia, Francesca, Elizabeth, Christian and Isaac; with a host of nieces, nephews and In- laws.