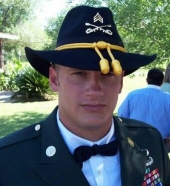 SGT. Scott William Cole US Army (Ret.) age 40 passed away Sunday November 6, 2016. Scott was born May 14, 1976 the oldest of 4 children to Richard and Attie Cole in San Antonio, TX. Scott served his country proudly for 12 years. He did four tour overseas, one in Kosovo, one in Iraq and two tours in Afghanistan. He received a Purple Heart on his last tour in Afghanistan after being shot in the hip. He was medically retired from the Army. After he retired, he returned home to be with his family and to go fishing as often as he wanted. He also loved to take long rides on his motorcycle. Scott is loved, honored and respected by all who knew him. He was the type of man that everyone aspires to be, kind, loving and most of all funny. Family was his world and he was the type of man that needed to protect everyone. Scott earned many accommodations in the Army but we his family earned the privilege to share our lives with him during his short time on this Earth with us. Scott is survived by his parents, Richard and Attie Cole; three children, Harley, Zoe, and Ricky Cole; sisters, Candice Yusko, and Amanda Finn; brother, Daniel Cole; and many Aunts, Uncles and cousins. He was loved by many and will be greatly missed.