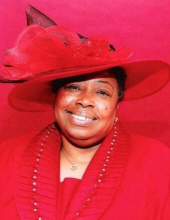 Sharon L. Carter was born to the union of Miss Lenzie Mae Brooks and Mr. James Owens Sr. on November 19, 1946. Sharon met Matthew Carter and they united in holy matrimony, they had two lovely children, Terry Louise and Jerry Lynn Carter. Sis. Carter worked for 36 years as an LVN, and went on to obtain her Bachelor’s Degree in Business Administration, Master’s Degree in Hospital Administration, as well as a second Master’s Degree in Human Resources. Sis. Carter served as the National President for Sigma Gamma Rho Sorority Incorporated for several years, and continued her faithful services in different positions within the organization for over 30 years until her passing. One of Sis. Carters many accomplishments was as the founder of “Ladies of the 80’s” which was an active force serving the communities throughout San Antonio. Sis. Carter confessed her joy in Christ early in life, which led to her serving as a faithful and active member in church throughout her life. Those left to cherish loving and fond memories include her children Terry and Jerry Carter; her grandson Jalen Mercer; her brothers James and Rodney Owens; many nieces nephews and a host of other family and friends.