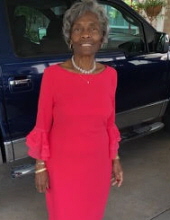 Life Journey of Shirley Mae Garrett Wesley The angelic Shirley Mae Garrett Wesley was the second child of eight, born on December 10, 1934 to Cornelius Napoleon Garrett and Drucilla Parker Garrett in Tucker, Arkansas. She was preceded in death by both parents, her first-born son, Reuben II, half-sisters Othella, Vonciel, and Hallard; brothers James, William, and Cornelius II, as well as her beloved husband Reuben. As a young child and throughout Shirley’s lifetime, she possessed a spirit of giving and service to others, unconditionally. Although she was very soft-spoken, her presence radiated a sense of strength and calmness. The soft touch of her hand along with her shy beautiful smile brought warmth and ease to all around her. Shirley accepted Christ at an early age and she was a member of Wheatley Heights Baptist Church. Her passions were cultivating flowers and plants. She was also a master of all southern cuisine, especially her famous sweet potato pie, pound cake and sock-it-to-me cake. Once you tasted Shirley’s cooking you were destined to come back for more. Shirley attended elementary and early high school years at Tucker Rosenwald School where she was an excellent basketball player. She graduated from J.C. Corbin School, Pine Bluff, Arkansas in 1952. After high school, she attended Shorter College in North Little Rock, Arkansas. Upon her graduation from Shorter at the age of 22, she moved to San Antonio, Texas to attend Incarnate Word University School of Nursing. She began her career as a pharmaceutical tech at a Texas pharmaceutical company, makers of Lubriderm lotion, and completed her work at SP Richards.. During her third year in college, Shirley met and was immediately smitten by her soul mate Reuben Benjamin Wesley. They married and she began her journey as a kind, patient and loving mother. Their 62-year union created a son Reuben II (deceased), and daughters Jackie (Rodney) and Terri (Don). She was blessed with four grandchildren: Shanika, Larry, Rahshied (Deanna) and Terrance; three great-grand children: Cedreon, Ameesha, and Terrance, Jr., and two great-great grandchildren: Zion and Zechariah. They all brought much joy and excitement to her household. She is survived by her three sisters: Edith Hyman, Dorothy Hughes, and Lois Thomas and two brothers: Clarence Garrett (Margaret) and Charles “Sam” Garrett. Shirley’s greatest love was her family; ensuring they were cared for tenderly. Her legacy is and will always be her gift of unconditional kindness, patience, and love. The brilliancy of her Light will forever radiate within our hearts and minds. Rest in the tranquil presence of the Lord sweet precious Angel.