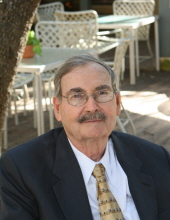 Steve Louis Reuthinger Jr. passed away September 5, 2019 in San Antonio, Texas. He was born and raised in Laredo, Texas and attended Martin High School where he played football and ran track. After attending college, his career spanned 45 years in retail management with Neisner's, Winn’s, and Dillard’s. Early in his career his job took him to Gainesville, Florida where he met his bride of 59 years, Lavada. After several years and a number of transfers in Florida, his career brought him back to Brownsville, Texas and then, finally, to San Antonio where he and Lavada raised their family. He served nine years in The National Guard Reserve and was commissioned as a 2nd Lieutenant. He was also a member of the Masons and a longtime member of Northeast Baptist Church. Steve enjoyed bowling, collecting coins and rocks, watching the stock markets and was a huge Dallas Cowboys fan. He was also known to enjoy an occasional trip to the Casinos to play the slots (where he usually won). Of all his accomplishments, he found his most joy in spending time with his family. Since retiring he and Lavada have taken numerous motorhome trips with their family. He was normally quiet in a crowd, however had a quick wit. He will be missed but we know he's rejoicing with his family who have already crossed into heaven. He is preceded in death by his sister, Peggy Hardt. He is survived by his wife, Lavada; his twin daughters, Sherry and Sandy; son, Stephen (Dianna); granddaughter, Taylor; sisters, Mary Hamlin, Jacque Higgs; and brother, Bill Reuthinger. The family will have a private memorial at a later date. In lieu of flowers, the family request donations to EMBRACE HOSPICE at: www.embracehospicellc.com.