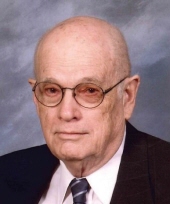 Following a lengthy illness, Steve L. Hurt died July 3, 2017, in San Antonio, TX. He was born on July 20,1934, in Paris, Texas, to Reagan and Mattie Lou Dickson Hurt. The family moved to Clarksville, Texas, where he graduated from high school in 1951. He attended Paris Junior College, Baylor University and Baylor Law School, graduating in 1957. He married Betty Allen in Bogata, Texas on December 18, 1954. He practiced law in Lubbock, Texas until 1960, when he relocated to Plainview, where he maintained an active law practice until 2008. He was a long-time member and elder of First Presbyterian Church, Plainview Lions Club and Plainview/Hale County Historical Society, and participated in Democratic party politics from the precinct level to the county level. He retired to San Antonio in 2008 and enjoyed new friendships at The Towers. He was a member of Northwood Presbyterian Church. He was predeceased by his parents and two brothers, Reagan Hurt, Jr. and Jimmy Hurt. He is survived by his wife of 62 years; son, David Hurt and daughter in law Sheilah; daughter, Margaret Anderson and son in law Michael; and son, Reagan Hurt; also a sister, Lou Ann Madison; and nine nieces and nephews. Memorial services will be held Thursday, July 13, at 11:00 a.m. at Northwood Presbyterian Church, 518 Pike Place, San Antonio. A reception will follow at The Towers on Park Lane.