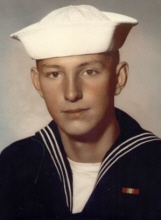 Steven Spencer passed away on July 4th 2005 at the Audie L. Murphy Veterans Hospital in San Antonio Texas. Steven was born on November 3, 1954 in Elmhurst IL to Douglas and Eileen Spencer. As a baby he moved with his family to the Menahga-Huntersville area where he grew up and attended the Menahga Schools. In 1972 he enlisted in the U.S. Navy and was stationed aboard the U.S.S. Halsey, he enjoyed very much the opportunity of travel and spent a lot of time touring the pacific. Upon his release from active duty he returned to Menahga. In 1985 he moved to Ranger Texas where he lived until his death. He was a very talented craftsman who created fine furniture and stained glass windows, all by hand and of his own design. He was a good friend, brother and uncle and will be missed by all who knew him. He was preceded in death by his parents Douglas and Eileen, and his sister Kathleen Munn Zentner. He is survived by his sister Bernadette Lipkin and husband Harvey of Granbury Texas, his brother Douglas Spencer and wife Joan of Fargo ND and his brother Richard Tapio and wife Valerie of Menahga. He also had four nieces, seven nephews and 21 great nephews and nieces. Service and Interment were held at Hubbard Cemetery on July 11, 2005 at 11:00 AM. Memorials in his memory may be made to Paralyzed Veterans of America. To leave a note for the family, go to www.meadowlawn.net and Select Obituaries. Arrangements by MeadowLawn Crematory and American Mortuary.