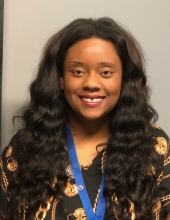 Tiffany Katrina McGarity-Davis was Born on October 11, 1978 in San Antonio, Texas she was the youngest of three children. She was educated in the Judson Independent School district where she graduated from Judson High School in 1996. She participated in pep squad, choir and debate. She later went on to pursue higher education at the University of Texas at San Antonio, where she studied accounting. In 1978, she was baptized at East Saint Paul United Methodist Church under the leadership of Reverend Troy Bell. On October 04, 2014 she was united in marriage to Edward L. Davis II. She spent her career working in payroll accounting at HEB and TaskUs. Tiffany enjoyed taking care of her dogs, taking cooking classes, traveling around the world and she loved Montenegro, and she had a strong passion for barbeque and spending time with her family. Tiffany’s father Charles Ervin McGarity, Sr preceded her in death. She leaves to cherish her memory of six years of marital bliss husband Edward, mother Dorothy McGarity, sister Natalie McGarity-Diaz (Jesse), brother Charles Ervin McGarity, Jr. (Tara), in-laws Ret. LTC Edward L. Davis, Sr. and Lillian Davis, sister in-law Rashonda Davis, nephew Aiden Diaz and nieces Alyssa Diaz, and Reigan Davis, host of aunts, an uncle and numerous cousins and friends and a Shih Tzu named Cozmo.