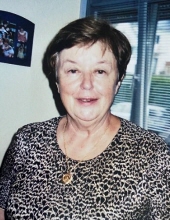 Ursula Magdalena Brell passed away on February 4th 2021 to be with the Lord, her husband Mike of 49 years, and her beloved mother Else. Ursula was born on July 31, 1941 in Trier, Germany which is on the Luxembourg border and where she grew up in an extended family that included her aunts and cousins. Her father, like some of her uncles and male cousins, died during World War Two. After graduating from a Catholic High School in her hometown of Trier, she studied linguistics in London and Munich where she became fluent in English, French, and Italian in addition to her native German. She went to work as a language translator at Bitburg Air Force Base where she met and in 1963 married Robert Michael Brell, known as Mike, who had two five-year military tours in Germany where their sons Michael and Mark were born in 1964 and 1967 respectively. After leaving German and a brief stop at Fort Dix in New Jersey, the family moved to Texas with Mike being stationed at Lackland, Brooks, and Laughlin (Del Rio) Air Force bases. During this time, Ursula dedicated her time to taking care of the family where she was known for providing 3 home-cooked meals every day, keeping a spotless house, studying the international news and politics of the day, spoiling the family dogs and cats, and supporting the local Catholic parishes which included singing in the Spanish choirs at St. Thomas Moore and St. John Neumann in northeast San Antonio. She was also the sole parent while her husband was stationed in Thailand and Vietnam in the early 1970s and was the main care giver to her mother and husband in their later years. Most of all, she was known for always, always putting her family first and sustaining her German culture which was reinforced by annual trips to Germany and hosting her mother Else in Texas for extended periods. She is survived by her sons Michael and Mark; daughters in law Sheila and Nolette; grandchildren Sydney, Reagan, Nick, Ericka, Sophia, and Adrianna; and cousins Erica Weber and Helga Herthfurt. The funeral Mass will be held at Saint John Neumann’s Catholic Church at 9:15am on March 4, 2021 followed by her burial at Fort Sam Houston National Cemetery.