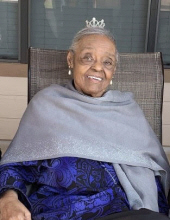 Vernelle Ruth Brewington, daughter of the late Edward and Christina Plummer, was born on October 12, 1926 in Cape May, New Jersey. She attended Central High School in Bridgeport, Connecticut and later, the Mount Vernon School of Nursing. Following the passing of her mother, her father married Agnes Plummer who embraced Vernelle as her own daughter. Vernelle united in holy matrimony to Walter Brewington on November 12, 1950 and moved to Mount Vernon, New York. Being the only child, she desired to have a big family. This union was blessed with four children; Wanda (deceased), Wayne, Wynne and Willette. She owned her own beauty salon, "La Glamorette" in Mount Vernon and later she would become a Licensed Vocational Nurse. Vernelle loved the Lord and she was the matriarch of her family. She relocated to San Antonio, Texas in 1997. She joined Maranatha Bible Church and was a member until her death. She enjoyed the arts, painting, puzzles, writing poetry, dancing and reading. Vernelle peacefully went home to the Lord, surrounded by family on Sunday, August 9, 2020. She will be remembered for her love, strength and perseverance. She was preceded in death by her parents, Edward and Christina Plummer; husband, Walter Brewington and daughter, Wanda Brewington. After her daughter's passing she raised her grandchild, Jillian, as her own daughter. Her beautiful, long lived life will be forever cherished in the hearts of her children; Wayne Brewington of Tampa, Florida; Wynne Boyd (Tony) of Charlotte, North Carolina and Willette Hopkins (Charles) of San Antonio, Texas. She also leaves behind fourteen grandchildren, a host of great-grandchildren and many friends.