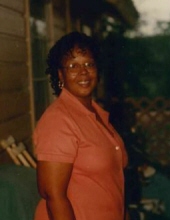 Vilma Hysaw Williams passed away Thursday, March 26, 2020 surrounded by her family at her residence. She was born to Felton Lee Davis and Gertie B. Hysaw Watts on September 18, 1950. Vilma was a premature baby born at the Luling Hospital in Luling, Texas. She attended Lockhart Elementary, Lockhart Middle and Lockhart High School. In Fort Worth, Texas she attended Brantley Draughan Business College. Vilma’s desire to learn as much as she could in the field of nursing led her to become a Certified Nurses Assistant, a Medication Aide, a Unit Secretary, and Ambulance Attendant and was in training to become a Surgical Tech. Vilma worked for different convalescent homes, in different offices at San Antonio State hospital and as a Unit Secretary at the San Antonio Santa Rosa Children’s Hospital 9th Nero floor. Since Vilma was raised in the country, she knew first hand what hard work was like, allowing it to shape her own work habits in life whether at home or on her various jobs. She showed by her own decisions and homemaking skills that she could truly live up to being the capable wife of whom the bible speaks of at Proverbs 31:15 thru 31. She knew she had real value in the eyesight of her god Jehovah. Vilma learned many cooking skills from her grandmother, sharing these at many family re-unions and other gatherings. Her grandmother, Addie Davis read her bible daily, having great respect for it. She called on and used God’s name Jehovah as found in her bible, teaching Vilma at an early age to always look to Jehovah God for help, read the bible and pray about anything in life. One of Vilm’s greatest joys in life was to symbolize her dedication to Jehovah God by water baptism on December 20, 2003 at the San Antonio Assembly Hall of Jehovah’s Witnesses on Eagle Crest Drive. She and other members would visit older ones who were in the hospital, nursing homes they would pray with them, read verses from scriptures or leave something with them to read. Before and after Vilma received the diagnosis of cancer of the Aorta she was active to the fullest extent possible, going door to door ministry and conducting bible studies. She is truly thankful for all who were supportive during her illness. Vilma is survived by her husband of 37 years, Willie ( Pete ) Ben Williams; she will be dearly missed by the loves of her life, daughter, Tara and Davelon and four grandchildren. Her son-in-law Reginald Powell A Memorial Service will be held at a later date.