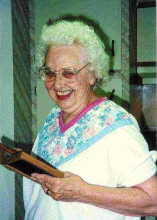 Violet Smith, age 81, beloved mother of Christina Smith, passed away August 29, 2004 at Methodist Heart Hospital in San Antonio, Texas. A Memorial Tribute will be held Saturday, September 11th at 11a.m., in the Chapel at St. Paul Lutheran Church, 181 S. Santa Clara Street in New Braunfels. Vi loved a good potluck, so in her honor, plan to stay for a potluck luncheon following the service. In lieu of flowers, it is Vi's request that bags of pet food and support be given to the New Braunfels Animal Shelter at 1920 Kuehler Ave., New Braunfels, Texas 78130, in her name. Vi was born on October 19, 1922, in Pittsville, Wisconsin. She was the seventh of eight children, born to Josephine and Otto Helander, both of whom were born in Sweden. Her childhood was spent on a farm in Dixon, Illinois. She grew up speaking only Swedish. Her first 8 years of education were spent in a one-room schoolhouse, with a wood burning stove and an outhouse. She attended high school in Polo, Illinois and business school in Rockford, Illinois. She moved to Chicago, where she lived until moving to New Braunfels in 1981. On September 9, 1950, she married Joseph Emmet Smith and to this union was born one child, Christina Priscilla. Joe died on June 9, 1991 after a long battle with Parkinson's disease. He was 79. In 1996 their darling dog Spud died, which just about broke her heart. Vi worked as an Executive Secretary throughout her life. She retired from Detex Corporation in 1986. After her retirement, she enjoyed many hours volunteering at St. Johns Thrift Shop, Hospice New Braunfels and Hospice Thrift Avenue. She loved putzying with plants and spending time in her yard. Vi loved people, flowers and animals. She was especially fond of elephants, monkeys and pigs. She enjoyed an invigorating walk every day. On January 1, 2004, she fell and broke her hip. She had a slow recovery but was doing well. She was enjoying life and looking forward to every tomorrow. She was determined to make the most of each day. It was just about time for her to trade in the walker for a cane. On August 26, she woke up and felt extremely tired. When her arm started to ache, she knew it was time to go to the hospital-even though she swore she would never ever return to a hospital. She made cinnamon bread the day prior to entering the hospital. The day before that she was at Hospice Thrift Avenue doing her volunteer work. She was anxious to watch the Republican Convention so she could boo Bush. She was a card-carrying Democrat. Her heart was tired. Then her kidneys got tired. She had minimal discomfort. She had no idea she was going to die. At 11a.m., she said she wanted her walker so she could get up to pee. Her mind was sharp and as strong as ever. Unfortunately, her heart and kidneys gave out. She took her last breath just one hour later at noon on August 29, 2004. Her only child Christina Smith, her sister Alice Schoen, brothers Tony Helander and Harold Helander, a few nieces and nephews and many friends survive her. She will be dearly missed.