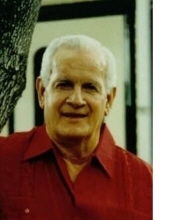 William Avon " Bill " Garner died the morning of June 8, 2019 in San Antonio with family in attendance. Bill had been struggling with dementia and bouts of pneumonia the last two years. He had been a resident of Elmendorf, Texas since 2006, having moved there from Pasadena, Texas. Bill’s first job was in his hometown of Alto, Texas as a grocer. During his lifetime, he owned a successful insurance agency, worked for Shell Pipeline, moved RV’s coast-to-coast for dealers and had numerous Buy-Sale-or-Trade stores among many other part-time and full-time occupations. Upon moving to the San Antonio area, he and his sweetheart, Josie Loredo, rescued many cats and several dogs and at one time, had 6 cats and 3 dogs sharing their home. Big Boy was his favorite and in the evening, he would invite the 90-pound dog to sit beside him for treats and to watch television. Bill was known for his wit and always had a quip for every occasion. He loved listening to traditional Mariachi music, gospel, bluegrass, Willie Nelson and Ray Price. He enjoyed watching football and the San Antonio Spurs. He loved driving and was proud that he had managed to step foot in all 50 states and had visited several countries. Bill thought he had been blessed to be born in Texas and was still attending his annual high school reunion in East Texas as often as his health and schedule allowed. He was fiercely loyal to his family and friends. Once his occupation allowed him to leave the suit and tie behind, he was henceforth seen in his beloved Guayabera shirts because they had plenty of pockets to fill! Bill was born to Elijah and Lela Hicks Garner on September 9, 1929. His parents, his two older brothers, Otis and Oren, his sister, Oretha and his two youngest children, Martin and Glenna Garner preceded him in death. He leaves behind his two daughters, Monta Gayle (Tookie) Horner and Karlyce Martina (Tina) Emshoff and husband Don, his son, Everett Nolan Garner, his youngest brother, Edwin Garner and his cherished Josie Loredo. Bill had five grandchildren: Matthew Wilcox, Kenson Wilcox, Thomas Horner, Eric Emshoff and Kate Gentile and seven great- grandchildren: Dillon, Kendell, Owen, Evan, Elizabeth, Lorenzo and Charlotte. There are numerous nieces, nephews and in-laws scattered throughout Texas to remember him. Bill elected to have no service or memorial but hoped that his family and friends would think of him and smile every time they enjoyed a home-grown tomato!