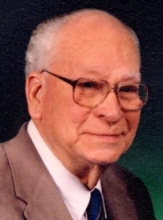 Dean was born August 31, 1913 in Shreveport, Louisiana and passed away at age 93 on May 25, 2007 at Hill Country Memorial Hospital in Fredericksburg, Texas. He grew up in Dallas where he had a paper route from age 10. He attended Forest Avenue High School where he was in the Leaders Club and won a state Latin contest. He was interested in radio from an early age and after high school, moved to Beaumont to attend radio school. Upon graduation during the depression, he was unable to find work in the field, but earned 50 cents a week to sleep in a fire station and hang his radio operator’s license on the wall. He supplemented his income by repairing radios door-to-door. He continued to fix radios and TVs for friends throughout his life. He eventually found work in the newspaper industry as a printer and worked in numerous cities throughout the South and Midwest to earn journeyman status. Dean met his wife, Maybelle Lowry, in Beaumont and married on February 10, 1940. They had two sons there before moving to San Antonio in 1948 for a job at the San Antonio Light newspaper. There he worked in the composing room for nearly 30 years, much of that time setting up the front page and main section of the paper. Early in his career he trained on a new Linotype machine and retired just as computers were taking over the printing department. He maintained his interest in radios all his life as an amateur (Ham) radio operator, W5BGE. In early years he sought contacts around the world. More recently, he participated in communication nets and talked almost every day with friends across Texas. He managed to put his experience to work during WW II installing radios on ships in Port Arthur. He was active in maintaining readiness for emergency communications and was recently recognized for 75 years of participation by the Quarter Century Wireless Association. Dean enjoyed camping and Scouting with his sons and served as a scout leader with Troup 46 at Los Angeles Heights Methodist Church. He was a Counselor for Merit Badges in Radio and Printing. After retiring, he and Maybelle spent 18 years making friends with other RVers around the country, often combining camping trips with amateur radio conventions. He had a ready smile and had met everyone in the RV park before dinnertime. Trips to California and Branson were inspired by their love of dancing to big band music. RV trips often included fishing as well, a lifelong pleasure of Maybelle. Dean had been a member of Beacon Hill Presbyterian Church since 1948. He served as Deacon and Elder, and again applied his experience to help with recording and amplification equipment. He was a Mason for over 50 years with the Blue Bonnet Lodge and was also a member of the Alzafar Shriners. He was preceded in death by his parents Buford and Elma Jones Davis and his sister Ruby Davis Tillery and his beloved wife Maybelle. He is survived by his sons Dean Lowry Davis and Dale Malcolm Davis and wife Marlyn; his much adored grandchildren, Christopher Wendel Davis, Lissa Lowry Davis and her husband Rusty Tchernis. He is also survived by nieces Marion Moses and husband Jerry, Jean Rambo and husband Bill and nephew Robert Lowry. The family extends heartfelt thanks to Dr. Kimberly Heller and her staff at Jefferson Family Practice for many years of loving care for both Dean and Maybelle. In addition we would like to thank Dr. Yvonne Haug, the staffs at Knopp Assisted Living Center, Knopp Nursing Home, and Hill Country Memorial Hospital for their exceptionally kind care during recent months. Memorial services will be held at Beacon Hill Presbyterian Church, 1100 Woodlawn Ave. on Saturday, June 16, at 2:30 PM with a reception to follow at the church. Memorials may be made to a charity of choice, the American Heart Association or Beacon Hill Presbyterian Church. Obituary and guestbook can be found online at meadowlawn.net.