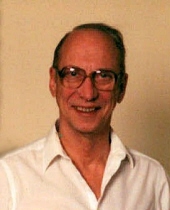 William G. Wright entered life on March 14, 1929 in Hazard, KY and passed April 27, 2005, in San Antonio, TX. He lived the majority of his life in Dayton, OH, raising seven children. He retired from Civil Service in 1987. For many years, he was an Electrical Engineer working on America’s race for the moon. He spent many years coaching the Kettering Striders, an AAU track team where he impacted countless young lives. In his retirement, he and his wife, Mary, enjoyed traveling to many places around the world. In 1998, he moved to San Antonio, TX. Mr. Wright leaves behind a large family including his wife, Mary, his sons John, Kenneth, Andrew, and Jerome, and his daughters Nora, Elizabeth, and Amanda. He also leaves behind his three grandchildren Jessica, Samantha, and Ian. Mr. Wright is also survived by his sister, Rose. The family would like to thank the staff of VITAS of San Antonio. We would like to express our heartfelt thanks especially to Ron and Hector for the wonderful care they provided to our Dad and for going above the call of duty on many occasions. You guys rock!