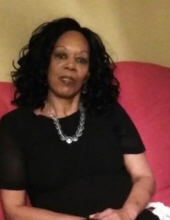 Veronica Jean Gibson went home to be with the Lord on Sunday, July 25, 2021 around 1:30 a.m. at the young age of 60.  She was born March 31, 1961 in Albany, Georgia at Turner AFB hospital to Everett Ray Gibson, Sr and Ella Bernice Waldon-Gibson.  Veronica was blessed with 2 sisters and 4 brothers. She was the younger of her 2 sisters out of 7 siblings. Veronica grew up in San Antonio, Texas and was a graduate from Theodore Roosevelt High School.  After graduating from High School she went on to play volleyball at St. Phillips College in San Antonio.  She was awarded as an outstanding player on the team. After her journey through various jobs, Veronica went on to become a Phlebotomist.  She was excited about achieving this position which finally set her on a solid foundation in her career. Veronica was known by her mom as her “Georgia Peach”. To her brothers and sisters she was known as our helping hands.  Veronica never married.  She spent her spare time helping her mom, brothers and sisters with numerous things, always there if called upon to help with any task at hand.  One of her hobbies was reading.  I mean she love to read. If she had a choice between TV or reading, without a doubt she would chose reading.  In the early days she would love to dance with her brother Bruce in public.   She once entered a dance contest at Windsor Park Mall and won first place receiving a small diamond ring and cash money.  She was a lot of fun to be around. Later on in Veronica's life, she was diagnosed with cancer. This did not stop her from doing the things she loved to do with her family. Cancer might have taken her physical body, but her spirit is at rest with the Lord.  Veronica loved the Lord.  She has fought a good fight, she has finished her course, and she kept the faith.  Preceded in death are her parents, Everette Ray Gibson and Ella B. Waldon-Gibson; her sister, Renee Gibson Zertuche and her brothers, Everette Ray Gibson Jr., and Bruce Duane Gibson. She leaves to mourn her siblings, Rochelle Bernice Gibson, Gregory Renard Gibson, and Keith Leon Gibson and a host of nieces, nephews, cousins, and friends.